His violin would bleed at 2 pm. Around that hour of the day, I’d be lying on my back daydreaming about our roof flying away to take me to a beautiful beach, like a third-world version of Dorothy from The Wizard of Oz, where I could just nap to the sound of the surf.

His violin would bleed the next day at 10 AM. Around that hour, I’d be washing dishes thinking of bubbles as snow.

All the while, I thought the old man from Dangula-an, Anilao was a musician. I wanted to touch his wrinkled hands.

Then one day, I heard a typewriter.

I’d stop daydreaming. I’d stop washing the dishes and would just listen intently. The typewriter sounded old and wild. Sometimes, it sounded sad, for it would sound so intense for 3 minutes and would just stop in thin air. Then, the next presses were hesitant. 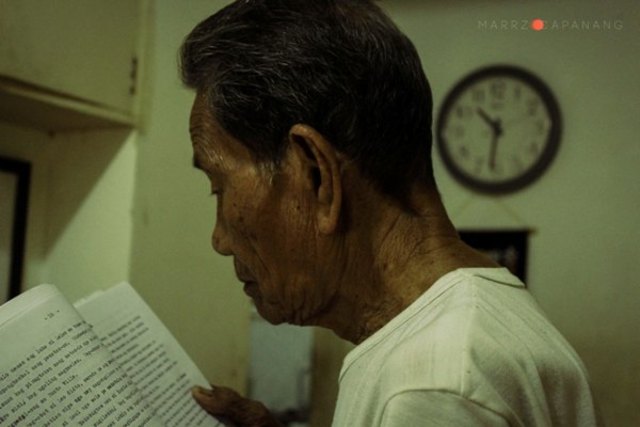 I started having the courage to talk to Pio Apil when he was already 84. He is one of the oldest writers for Hiligaynon Magazine. He has a profound love for Iloilo and our local language. Consequently, he has been writing almost every day since he was 9 years old.

(Truth be told, it is not very important to me if others can’t appreciate what I have been doing. I am happy that I get to do what I love – writing almost every day of my life.)

Even during the Martial Law years when Hiligaynon Magazine stopped circulating, he kept on writing. He never stopped penning down his reflections, melancholia, loss, imaginary lives and worlds. To him, it is not that important if no one’s reading the poems, the novelettes, the comic strips and the short stories he has woven. The intimacy he shares with the paper and the ink makes him feel so alive; so meaningful. And it’s all that matters to him.

(Sometimes, I cry while writing. I feel the words.)

The story of Lolo Pio

I remember the first time I visited Dangula-an. It was dark. Some of the trees were even breathing in the night. The breeze was cool, and there was this mysterious energy that I, the young girl that I was, could not fathom yet. Pio Apil spent most of his younger years there – in a silent, almost unknown barrio away from the main road.

At 14, he reached grade four. At 18, he started writing about romance. At 21, he finally got published in his school paper when he reached high school. He wrote his thoughts on a notebook. He scribbled what his young mind could touch. He wrote so much about daily life and nature. He spent most of those years being with cows. Being a bakero (cow herder) helped him and his family afford school. During the Second World War, he looked after 7 cows in exchange for 7 sacks of palay.

(The lady I was wooing had no idea that I am a writer. Once, I wrote something about her and decided to get it published in Hiligaynon Magazine. It was accepted and they gave me P30 as honorarium. I showed her what I wrote and also gave her the money as gift. Eventually, she became my wife.)

(I found it tough when they required ‘computerized’ versions of my contributions. I have been with my typewriter for so many years. I sometimes request my grandchildren to transcribe my writings for me but it seems that they are always busy with their own lives.)

(I have also tried imparting this gift of writing to my children and my grandchildren but nobody is that interested. Perhaps, I can just leave all my writings with them so they will not forget me when I pass away.)

I wanted to look him in the eyes. His eyes are now blurry, brought about by the decades and the endless hours of watching the words appear on the white sheets. Yet, his visions have remained wide-eyed. His remaining days are now spent alone, with off-white walls, weak knees, and a bit of deafness as his company.

I wanted to take in what these modern times have forgotten; what I have unconsciously forgotten. I wanted to linger on that space where authentic culture bearers like him are listened to. I wanted to absorb his dreams that have gazed at the cows when he was a young boy.

He told me cheerfully that he likes being old because nowadays, he has more time for his imagination, his reflections, and his stories.

He told me he will never stop writing in our beautiful language as long as he lives.

IGSUSULAT
by Pio Apil
“Sa hagunoy sang malum-ok
nga dupoy sang hangin
nga nagapaibok sang
akon inugsulat,
ginahanduraw kong
kapintas sang
panagubilin
sang paghigugma nga sa
saad indi dapat.”
—
“In the blowing of the
Soft breeze
which makes my composition
breathe,
I can imagine the
cruelty of the last
words of the love
that is untrue
to the vow.”

Pio Apil won several Hiligaynon short story writing contests in his career. He was also a part of Patubas, an Anthology of West Visayan Poetry, 1986-1994.