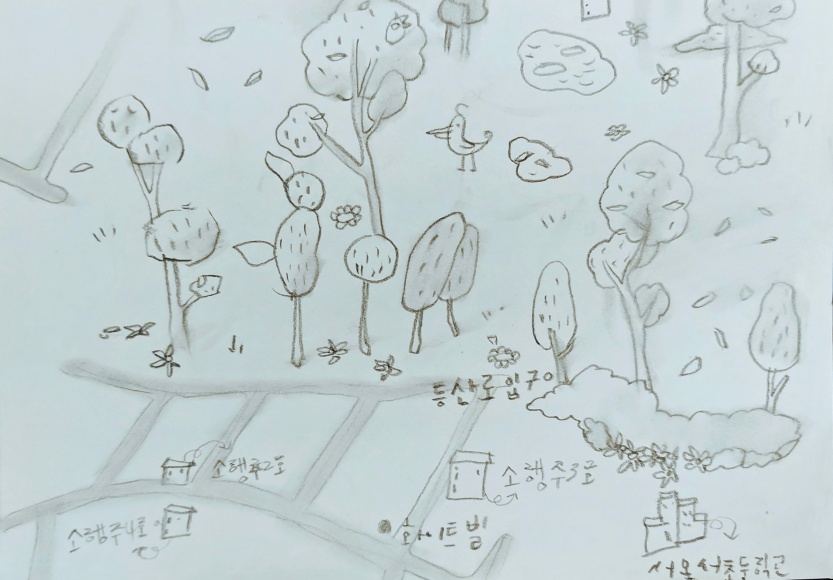 The sunlit glass walls made the highly urbanized city outside looked picturesque. What a backdrop for the sign language specialist who, word by word, used her hands with grace and conviction. Her face was delicate. Her eyes regal. The wildflower in me who was in the middle of a stern, technical, and competitive gathering found calm because of her presence.

Professor Park’s presentation was very different from mine. As an academic researcher and sociologist, he shared with us a very comprehensive report on “Divergent pathways of social enterprise in South Korea and the challenges for social innovation”.  After my presentation “From forest to your body: indigenous narratives to handmade jewelries “, he sat beside me and expressed his utmost appreciation and sheer curiosity. Weeks before arriving in HongKong, I wrote the organizer that I was backing out because of feeling inadequate and tiny. I was the only woman and the youngest in the pool of speakers in our category. I come from a very indie and grassroots way of doing things and receiving the invitation with the list of presenters and their bio made me feel very shy.

Meanwhile, Professor Park seemed to have recognized something in me and he trusted what he saw.  In the bus ride before we parted ways, he shared that he wanted to send me and my family a box of ramyeon. Based on past experience, a door-to-door package from abroad could take a couple of months to arrive. By November that year, the packs of ramyeon did not make it to my home address yet, but an e-invitation did. He asked me to represent our small creative project and social enterprise in South Korea, specifically at Hallym University where he is working as Vice President for International Student and Community Affairs and as a Sociology teacher. His e-invite was concise and direct: and in between the lines, I felt his immense belief in what we have created and in the story that I am telling. There was this kind of warm light that filled my gut, and it flowed right through my chest – a murky river swam by luminous fish. I understood right then and there how it felt like to be seen.

On our way to Chuncheon-si, I fell asleep. I woke up to snow falling unstoppably and the whole landscape outside was covered solely by glistening whiteness.  I leaned my head on the car window and watched the world pass by. I was widely awake with its silence.

Professor Park invited speakers who were his friends from the academic research circle. They flew all the way from Japan, France, and HongKong. Others were his friends and colleagues from around South Korea. I was the only woman presenter again – also the youngest and most inexperienced, but the energy was warm, engaging, open, and curious. A particular vibe that makes me thrive – the kind of acceptance that empowers me to be just myself. We had meals, teas and coffees, and lots of meaningful conversations in between the formal sessions. There was a dinner that was overwhelmingly filling – stomach, heart, mind – the cold outside had no space at all because the heartwarming inter-cultural engagements brimmed over our beings. When I felt like talking, nobody made me feel I should not. Aude who was one of the moderators spoke about something that has remained in me:

“After listening to everyone’s speeches, I’d like to share my heartfelt realization that studies, researches, and statistics alone cannot really deepen the social economy. We need people like our Filipino friends here who are committed to engaged community work and the arts. For us to make this work, let us be open to collaboration. Let us ask ourselves how can academic researchers and community-engaged artists work together for a better world?”

True to his intention for the gathering, Professor Park and his team organized a walking tour that moved me closer to the possibilities of my own envisioned reality. Visiting Sungmisan Village humbled me in a very life-changing way. In 1994, when Seoul city officials threatened to cut down and remove trees on top of Mount Sungmi, a group of neighbors strongly banded to go against the plan. After defeating it, they continued to organize and slowly and started up with their own communal childcare cooperative called Woori Daycare Center. In 2004, the community opened Sungmisan Village School -an alternative against the traditional education system. The school provides a curriculum with its priority of ‘experiences with nature’. Rather than focusing on Math or English, children spend more time learning skills and practical training in order to uphold sustainable living through organic farming, clean energy, beekeeping, ecological and environmental practices, and more. In between those years, they were able to build regenerative models that represented the kind of economy that focuses on values rather than just profit – a local library, seasonal and locally-sourced eateries and cafes, cooperative organic stores, cooperatives for the elderly, house sharing buildings , workshop and craft spaces for everyone including those with special needs, etc. They grew into roughly 70 organizations, 20 cooperatives, and 9,000 household members in a span of 20 years, and the city government has allowed them to enjoy and deepen their autonomy.

Walking around Sungmisan Village and being able to experience the philosophy and energy that breathed through it made me think of all the genuine revolutionaries I have been blessed to know and meet in my life. Most especially those who needed to die – body or soul – to fight for social justice. And I thought to myself, “what if they too, were given the chance to create the kind of community they envisioned and deserved?”

Stepping into every intentional space there felt like walking around the fulfillment of human willpower, grassroots ingenuity, self and local community reliance, and the deeper meaning and purpose of family.

While in the workshop area for children with special needs, I had an epiphany. I was there experiencing such a rich moment because like those kids who crafted the beautiful things I was touching, someone thought that I and the community I represented have the right to feel included. Someone saw beyond the limits of our systemic wounds, the soul of what a connected world truly is.

I started working really hard two weeks after college graduation – supporting a sister in university and helping out in the family for we were then struggling to make ends meet. I juggled a couple of jobs – web content writing at a webmaster staffing firm (10 PM- 6 AM) and ESL tutoring (1 PM – 4 PM). I thought high school Class Valedictorians and university contest debaters-student leaders had singular attractive narratives of success and front lining. There was a silent shame that consumed me for not being able to follow that trail. I had to keep up with my tight work schedule because that provided the necessary things for people I deeply cared about. Without any exaggeration, I could say that for a long while, I had to deliberately close my eyes from being young – going out with friends, hanging out and eating out in nice places, and feeding my curious feet.

The roughness of the bark felt so good. I lifted my whole weight up and swung my body so I could sit comfortably on a branch of our indian mango tree. From my view, the sugarcane fields met the ride paddies at some point. My imagination flew far and I wondered about other children from faraway lands – how they looked like and what they were doing at that exact moment.

I took a bite from the fruit on my small hand.